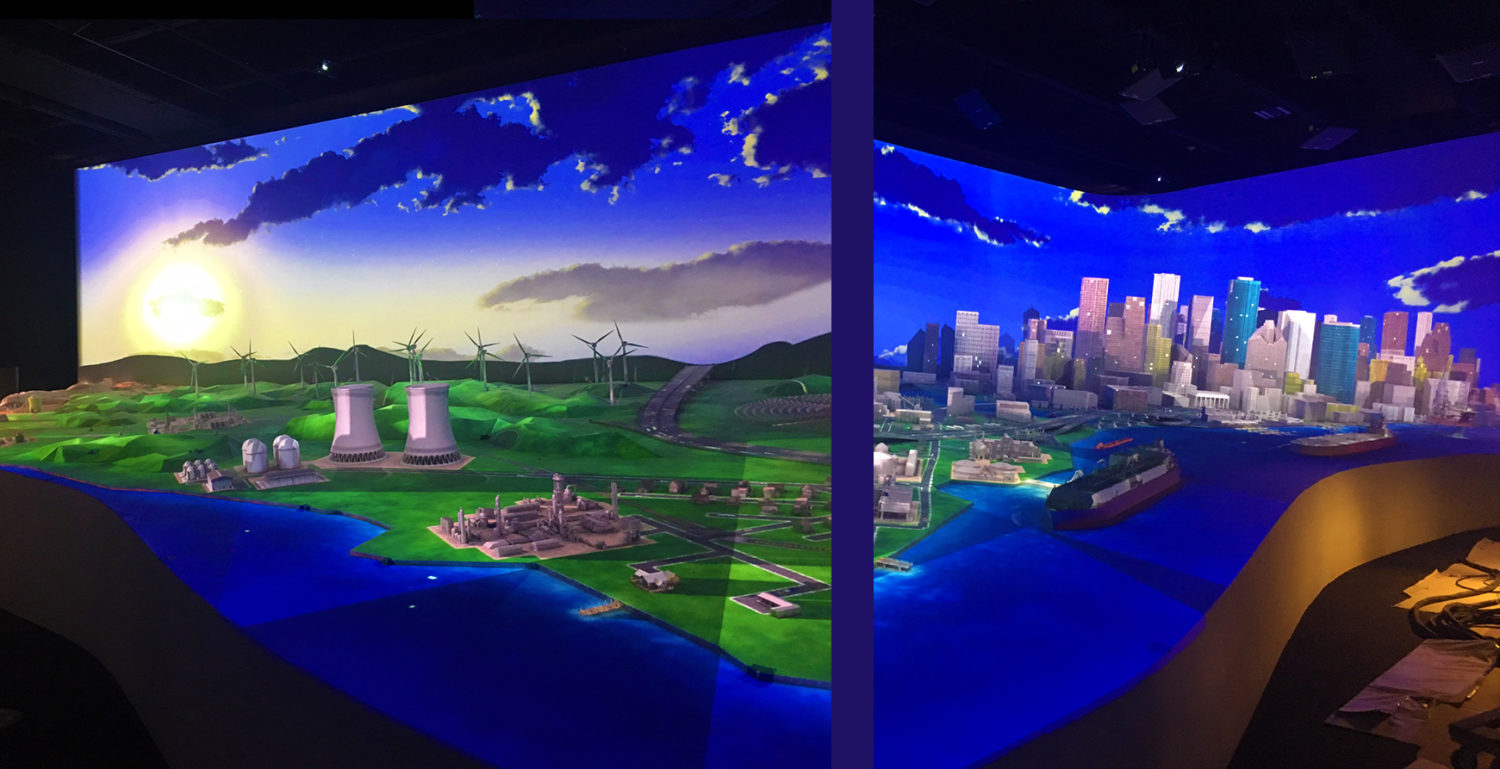 EXHIBIT OPENS TO THE PUBLIC ON NOVEMBER 20TH

AT THE HOUSTON MUSEUM OF NATURAL SCIENCE

Houston, TX— RabCup, hired by Paul Bernhard Exhibit Design and Consulting (PBE) to bring the famed “Energy City” to life are now unveiling the details of this epic installation which took over two years to develop.

Energy City is one of the highlight installations in the new Wiess Energy Hall, the most comprehensive energy exhibit in the world. “Energy City,” a 2,500-square-foot 3D landscape designed and fabricated by PBE, represents Houston, the surrounding Gulf coastal waters, and the terrain of southeast and central Texas. This vibrant 1/150th-scale “white model” will use bleeding-edge projection mapping technology to bring to life the energy value chain with dynamic animation as the entire tableau cycles from day to night.

PBE, the design company selected to create the Wiess Energy Hall at the Houston Museum of Natural Science, chose to work with RabCup (www.RabCup.com) on “Energy City” for their extensive projection mapping experience, inventive video solutions, and project management expertise.  Assessing the task at hand, RabCup founders AJ Freysteinson and Justin Fortier immediately got to work on assembling the best possible group of field experts to help create this masterpiece installation.

Enlisting Green Hippo (www.green-hippo.com) to move over 128 megapixels of content in a model that is over 13 million vertices wasn’t the only thing RabCup would need the media server manufacturer for. They also tapped Cory Froke, SuperTech at Green Hippo, to join the endeavor.  With a rock solid team in place, the projection study, preliminary system design and projection design complete, it became apparent that existing automated alignment systems were not going to be feasible, technically or financially.  Due to the complexity of the model, this would have required a minimum of one camera per projector, likely even more.  So the R&D began on an alternative, affordable alignment system that can stand on its own, completely independent of the projection system. With a formidable task at hand, Green Hippo created SHAPE Auto-Alignment, a camera-less, affordable, automated alignment system that can align and blend all 32 projectors at the touch of a button in minutes. 168 fiber optic light sensors embedded into the model, using over 7 kilometers of plastic sensor fiber routed back to custom-built SHAPE Processing Nodes make this possible.  Green Hippo’s component-based structure allowed the team to remove any unnecessary features, giving the render engine more resources to deal with playing that much video seamlessly.  The 128 Megapixel content delivery resolution is one of the most intricate projection mapping projects ever done (with over 13 million polygons in the model!).  60fps playback is accomplished with ease by a system of (9) Green Hippo Hippotizer Taiga DP, with (2) Hippotizer Amba serving as management machines for the system.

Equally as important to this project was content.  Rabcup selected Radar (www.radarla.com) to produce the animated media for Energy City.  With a team of over 30 people, including 12 animators, 4 producers, and 4 content writers, Radar created custom content for this installation bringing Houston into focus on the model.  Over the course of the project, Radar rendered over 30 TERABYTES worth of content.  Final animations show 8 different energy systems and stories as well as a 24 hour time-lapse of the city itself.  A fun tidbit to note, if you look hard enough, there are various “easter eggs” built into the city scenes.  Viewers can search for such things as a T-Rex, an alien abduction, and then more normal city occurrences like a police chase, and other exciting minutiae.

For two and a half years, RabCup worked with PBE to create “Energy City”, recruiting the expertise of Green Hippo and Radar.  Together, this team of experts have created a one of a kind exhibit, showcasing new technologies in a fun, educational manner.

“Collaborating with PBE on this project for the last two and a half years has truly been an honor.  They created an astonishing canvas,” said RabCup co-founder Justin Fortier.  “It’s an incredible feeling to have your work showcased in such an admired museum, it calls for all of us to bring our best. And having our work centered on education is something we’re are all proud of.”

“Working on a museum floor going from concrete to a fully built out tech heavy space, over the course of two years, while engaging some of the most creative people we have ever had the pleasure to be around, has made this experience one of the most exciting projects we’ve ever been a part of,” added RabCup co-founder AJ Freysteinson.

The exhibit features 30 minutes of custom content, a five-minute day to night sequence and 8 Science modules.  The 6.1 channel audio system with speakers spread across the 80’-wide model create amazing immersive effects.  The model features environmental sounds specific to a certain area so that no matter where a viewer is standing, that area will have its own distinct sound.  The end result is a stunning visual and audio tour de force, with a new experience every time you walk into the room.

For more information on the exhibit please visit www.RabCup.com or www.hmns.org.

Formed in 2000, Green Hippo has grown from a specialist manufacturer of bespoke solutions to one of the leading players in the ever-growing field of scenic video. The company’s award winning Hippotizer™ range is now in its fourth generation and can be found providing real-time video playback for television sets including Eurovision, The Academy Awards, the Super Bowl halftime shows. Theatre spectaculars such as Love Never Dies in the West End and American Idiot on Broadway utilise the system due to its flexibility during production periods and concert tours for artists such as Beyonce, Depeche Mode, and Madonna have proven its reliability out on the road.

As a result of the boom in video as an integral part of all high-profile events from opening ceremonies to corporate shows, Hippotizer™ media servers now reside in the inventory of most of the major rental companies worldwide alongside an ever-growing set of owner operators worldwide.

The Houston Museum of Natural Science—one of the nation’s most heavily attended museums—is a centerpiece of the Houston Museum District. With four floors of permanent exhibit halls, and the Wortham Giant Screen Theatre, Cockrell Butterfly Center, Burke Baker Planetarium, and George Observatory, and as host to world-class and ever-changing touring exhibitions, the Museum has something to delight every age group. With such diverse and extraordinary offerings, a trip to the Houston Museum of Natural Science, located at 5555 Hermann Park Drive in the heart of the Museum District, is always an adventure. www.hmns.org

PBE creates museum exhibitions. PBE is a diverse team of designers, content specialists, writers, programmers, engineers, graphic artists, fabricators, technicians, administrators—and other hard-working go-getters, all collaborating to produce a vast variety of projects across a multitude of media. PBE’s work reflects the team’s diversity: whether the task is creating exhibit halls, immersive environments, digital media, or movie sets, PBE realizes a vision that meets the goals of the organizations it serves.  www.pbexhibits.com

As we move closer to the launch of Energy City, the 2-year project Radar completed with PBE, Rab Cup and Green Hippo, we’re thrilled to see such awesome press coverage of our work.

Check out these excerpts from The Houston Chronicle:

“We take the science and education piece of it very seriously, but we have to make it fun and find a way to spark people’s imagination and hope that they want to learn more after they leave the museum,” Bartsch said. “It’s all incredibly cool.”

The milk-white model city is eye-catching. But the magic really happens when the museum staffers turn on a series of projectors that cast images on the models, simulating windows on buildings, turning day to night, and making cars and trains “move” throughout the city.”