Bears? On Overcoming Obstacles & the Pricelessness of Danger

Deep in the lush green of the back-country, Greg is living his best life replete with a simple backpack, a water-bottle, and his map. He thinks to himself that this is where he truly belongs: on this hike, out in this wonderful wild, far away from cell-phone signal and the endless list of emails.

As he approaches a new trail up ahead, he hesitates a moment and starts to slow down.  Startled, he stops suddenly. Greg senses something ahead of him.

“What is that?” he whispers to himself, cautiously.  It was as if he could sense and hear something before he could actually see it.

Squinting into the sunlight, he strains to see what is up ahead.  His heart beat pounding now in his ears, his eyes make out the outlines of a fairly huge bear feasting on a carcass. It was maybe forty or fifty feet in the distance.

All in an instant, Greg’s moment of hiking-zen is interrupted by mental images of the horrific bear scene in The Revenant.

“Snap out of it, bro,” he whispers to himself.  “That’s a huge bear, but it doesn’t look like a grizzly.”

Slowly, he backs away quietly, keeping his eyes glued on the bear, grateful that he wasn’t noticed by the beast in the midst of its carcass-feasting.  He waits until the bear is completely out of view and then starts jogging back to his tent.

“New plan,” he breathes aloud, grateful for the wild encounter. 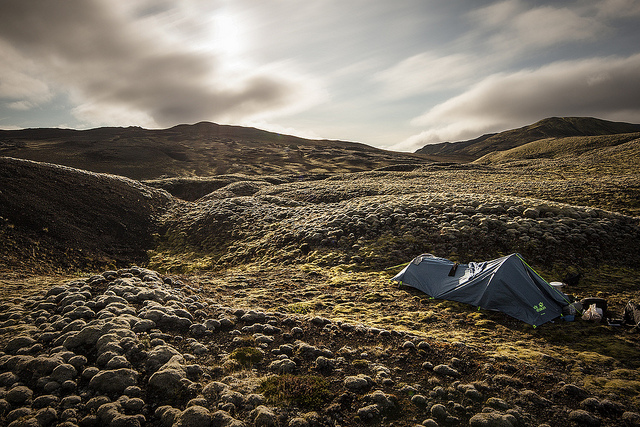 Overcoming unexpected obstacles is a key part of the creative process. At Radar, we’ve learned that sometimes encountering “the bear” is a gift: it means turning around and retreating on a route that we originally thought was ideal. Sometimes it even means going back to the Roost to rest and re-group, much like Greg had to return to his campsite.

While hindsight is always 20/20, in the midst of a stressful project that encounters obstacles, we try to remind ourselves that having to pivot on a dime forces us to think in new, creative ways.

Sometimes the encounter with the bear is exactly the “dangerous moment” we needed. Pivoting on our plan forces to think strategically and creatively on new levels.

It reminds us that this is the adventure that we signed up for.

The Camping Creative is the eighth of a multi-part blog series, tying together the tent-pegs of camping and creativity.  Read the first post here.